Home > Car Care > When does the alternator need to be replaced in a car?

When does the alternator need to be replaced in a car?

The alternator in a car generates electric power and recharges the battery when the engine is running. The alternator only needs to be replaced if it stops working or has some defect, such as a noisy bearing. There are no mileage or age requirements for the replacement. It is a good idea to replace an old alternator as a precaution if it shows early signs of failing; for example, when the battery warning light keeps coming on and off and the aging alternator is the prime suspect. 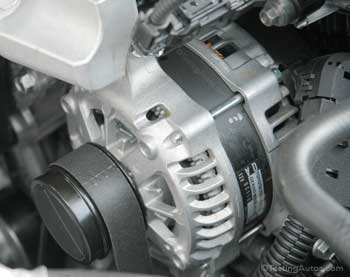 Tip: one of the reasons an alternator can fail prematurely is when an engine splash shield is broken or missing and road dirt and moisture can get into the alternator.

What are the symptoms of a bad alternator?

Charge warning light.
In some cars, the message "Check Charging System" might also appear on the driver's display. If the warning light keeps coming on intermittently, it's often because the alternator is failing.

Another symptom of a weak alternator is when the lights in a car dim when the engine idles, but get brighter when it's revved. If a good battery is not being charged when the engine is running, it could also be because of a bad alternator. Of course these symptoms could be caused by other issues such as corroded battery terminals, wiring problems or a loose or broken alternator belt. To confirm, the belt drive must be inspected and the alternator must be tested.

How do mechanics test an alternator?

Auto repair shops have a tester (in the photo) that can test the battery and the charging system. After the test with such a tester, you will get a printout showing the charging system performance. The only problem is that if the alternator has an intermittent problem, it may pass the test when tested, but stop working again later.

Testing the charging system and battery capacity with a battery tester.

In this car, the charging system test shows that the alternator is OK.
If an old alternator is suspected of having an intermittent problem, it make sense to replace it as a precaution, so it won't leave you stranded. Whenever there is a problem with an alternator, the alternator wiring connectors must be checked for corrosion and looseness.

Your mechanic can also use a voltmeter to test the alternator output (charging) voltage with the engine running. We usually do this test with the headlights on to make sure the alternator works under load. A good working alternator should generate 13.5-14.2 Volts. In some cars, the charging system voltage might go up to 15 Volts. In some modern cars, the alternator is not charging constantly, but rather comes on and off as commanded by the computer (PCM) as a fuel-saving measure.

In some cars, an overrunning alternator decoupling (OAD) pulley can also fail or start making a whining noise. In many cases, the OAD pulley can be replaced separately, but might require a special tool.

How much does the alternator replacement cost?

There are several repair options: an OEM alternator (part) is more expensive ($380-$780). The new aftermarket or rebuilt alternator is cheaper ($180 to $420). The price typically includes a core charge that you will get back after returning the old part (core).

Tip: some modern vehicles with Start-Stop system that shuts down the engine when a car is stopped have a special heavy-duty alternator. It's important to verify that an aftermarket alternator will fit.

Labor charges to replace an alternator can vary from 1.0 to 3.0 hours depending on the difficulty and the location of the alternator. In an average compact car with a small engine, it's a fairly easy job. In some vehicles with limited space under the hood, many parts may have to be removed to get to the alternator, and this will cost more.

Another option is to have the alternator rebuilt by a local Starter & Alternator shop. It's cheaper ($100-$170 without installation) but takes more time.


Advertisement
Many automotive wreckers sell used alternators; they are usually not very expensive $40-$150, but the condition is unknown. If an alternator was stored outside in humid conditions, it might be corroded inside. Ask for warranty.

Should the battery be replaced whenever an alternator is replaced? It's not necessary, however it's not uncommon for an old battery to fail when the alternator stops working. This happens because when the battery is completely drained, it deteriorates sooner. Read more: When to replace the 12-Volt car battery? If your alternator has been replaced and the battery is discharged, your mechanic can re-test the battery after it has been fully recharged. It takes 20-40 minutes of running the engine or driving to recharge a good battery.

Alternator recalls: Several car makers, including Fiat Chrysler, GM and Nissan, have issued recalls related to alternators in the past, check with your dealer or look it up on the NHTSA website.


Read Next:
How a starter motor works, signs that it's going bad, replacement cost
When to replace the 12-Volt car battery?
When should you change your automatic transmission fluid?
How often do brakes need to be serviced?
How To Save Money on Car Repairs - Mechanic's Tips 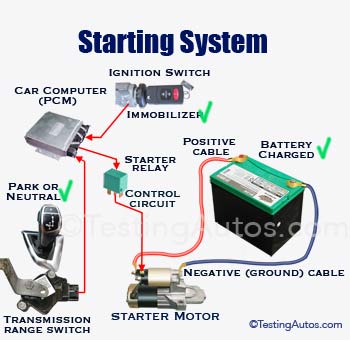 How often should an engine air filter be changed?