2009 Toyota 4Runner. Photo: Toyota.
Carcomplaints.com shows a similar trend with the addition of reports of a cracked or "melted" dash. With this in mind, the 2003-2005 4Runner should be avoided unless it can be verified that the frame and other mechanical components are in great shape. For the same reason, it's a good idea to avoid trucks from "salt belt" states.

2009 Toyota 4Runner. Photo: Toyota.
The cost to replace a timing belt in this engine ranges between $490 and $1,100 depending on the shop and whether a water pump, serpentine belt and parts like a crankshaft seal and a belt tensioner are replaced at the same time. It's probably a good idea to get the timing belt replacement done at a Toyota dealer since their technicians are experienced with this job. It's also not very difficult to check the timing belt condition; one of the timing belt covers needs to be removed for that. 4.0L V6 versus 4.7L V8? Both are solid engines and can last long with good care. The V8 offers more power and greater towing capacity. We think that in similar conditions, the V8 will last longer; read this post from TruckTrend.com about the million mile Toyota Tundra with the 4.7L 2UZ-FE engine. On the other hand, the V8 is thirstier and will require the replacement of the timing belt approximately every 6 years with average driving.

4.7L V8. Photo: Toyota.
There have been reports of head gasket failures in the early V6 4Runners and the V6 timing chain can stretch at higher mileage, but the V8's cracked exhaust manifolds are also expensive to replace.

What to watch out for when buying a used 4-th gen. Toyota 4Runner? When taking the vehicle for a pre-purchase inspection, ask a mechanic to check the frame, crossmembers and undercarriage components for rust damage. Some rust damage areas could be hidden behind the skid plates. Trucks from the region with high road salt usage or high-humidity are more likely to have rust. If the frame shows considerable rust damage, the vehicle should be avoided. Other underneath items that are known to go bad include lower ball joints, brake calipers (they tend to stick), CV axle boots, spare tire lowering mechanism and the X-REAS suspension. The X-REAS suspension could be troublesome at higher mileage, we recommend looking for the 4Runner without this option. A loud ticking noise from the 4.7L V8 when it's started cold might be an indication of a leaking/cracked exhaust manifold which will require expensive repairs. A low coolant level or white smoke from the exhaust could be signs of a blown head gasket, which is one of the known problems in the early 4.0L V6 engines at higher mileage. Early signs of a leaking head gasket in the 1GR-FE engine include occasional misfiring (often, cylinder 6) and loss of coolant. Your mechanic can do the cooling system pressure test or check for presence of exhaust gases in the cooling system to check for a leaking head gasket. It might also be a good idea to scan the engine computer (ECM) for previously stored trouble codes (e.g. code P0306 for cylinder 6 misfire). Generally, if there is a smoke from the exhaust when the engine is started, the vehicle should be avoided. A low oil level could also indicate that the engine consumes oil. All 4WD system functions must be tested, as the 4WD actuator tends to stick if not used for a long time. Watch out for any of the warning lights staying on with the engine running.

4WD maintenance: The 4WD 4Runner has a transfer case and front and rear differentials. The oil in all three units must be checked regularly and changed if dirty. The drive (propeller) shaft needs to be greased at least at every other service. If the grease dries out, it may cause a "clunk" felt in the driveline. Other parts of the 4WD system, including front CV axles, need to be inspected periodically for leaks and other problems. The transfer case actuator tends to stick if not used for a long time. Rustproofing: If the frame is still in good shape, rustproofing can help preserve it. 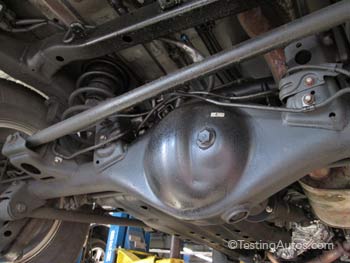 This truck has been sprayed with oil spray.
There are many shops that can rustproof your truck for $89-$200. Given the importance of the frame and other undercarriage components, it's an investment in your truck's longevity. This 8-years old Toyota in the photo has been rustproofed using oil spray and re-sprayed every year. Read more: Should you rustproof your vehicle?

A/F sensors:
One of the common problems with the Toyota 4Runner is a failed A/F (air-fuel ratio) sensor also known as a front (upstream) O2 sensor.

1GR-FE and 2UZ-FE Cylinder banks.
Typically you will get the Check Engine light and the scan will show the trouble code related to the A/F sensor. B1S1 means Bank 1 Sensor 1 (upstream sensor). B2S1 means Bank 2 Sensor 1. The upstream sensor, or Sensor 1 is installed in the exhaust before the catalytic converter. The Sensor 2 is the one after the catalytic converter. An aftermarket A/F sensor costs $50-$75 and is not very difficult to replace. Whenever the A/F sensor is replaced, the sensor connector must also be checked and cleaned if needed.


Read Next:
How to read the oil on a dipstick
When should the transfer case oil be changed?
When to replace the 12-Volt car battery?
How often should the wheel alignment be done?
How often do brakes need to be serviced?
How To Save Money on Car Repairs - Mechanic's Tips